How Much Do You Need to Become Rich?

Person A makes $50,000 per year. His passion is nature. Nothing in his life compares to being in the middle of a forest, studying and observing how nature works. He spends as much time as possible outdoors documenting his observations and sharing them with others. That's what he does for a living and that where he feels the most at home : at one with nature. He lives in a small house in the middle of the forest equipped with everything he needs and want to study nature.

Person B makes $500,000,000 per year. Her passion is to compose and create music. Nothing in her life compares to bringing new ideas to life and hearing artists and fans sing and play the songs she created. She loves every aspect of creating music and knows practically everything there is to know about the subject. She has a large house that also doubles as a recording studio equipped with everything she needs to create her masterpieces and have artists over to create along with her.

Which one is richer? In his book Wattles defines being rich as being a flourishing human being in every aspects of our lives, without any constraints. People who constantly feed their mind, body and soul in order to grow in all aspects of their lives. To do so, they require a certain amount of money so that they can make use of things, allowing them to thrive in their particular fields of interest. How much money? It depends on what they require to make the most of themselves. It may be $50,000 per year or $500,000,000 per year. In this case, despite the $499,950,000 difference, if they are both fulfilled in every aspects of their lives, they are both equally rich. There is no one-size-fits-all when it comes to amount of money required to truly become rich.

Unfortunately, somewhere along the lines, it seems like the popular definition of what being rich truly means got confused with the idea of being ostentatious, trying to keep up with the Joneses. Keeping up with the Joneses is a silly idea : Buying things they don't need or want to impress people they don't like or care about. It's a waste of time and it's not what Wattle's book is about.

Instead, being rich should be a state of being, not defined by what others think of us but by how we feel about ourselves through the way we interact with out environment. Once we understand that, we can determine what amount of money we truly require to be rich and start working towards it.

No comments: Links to this post
Email ThisBlogThis!Share to TwitterShare to FacebookShare to Pinterest
Labels: Illustrated thoughts 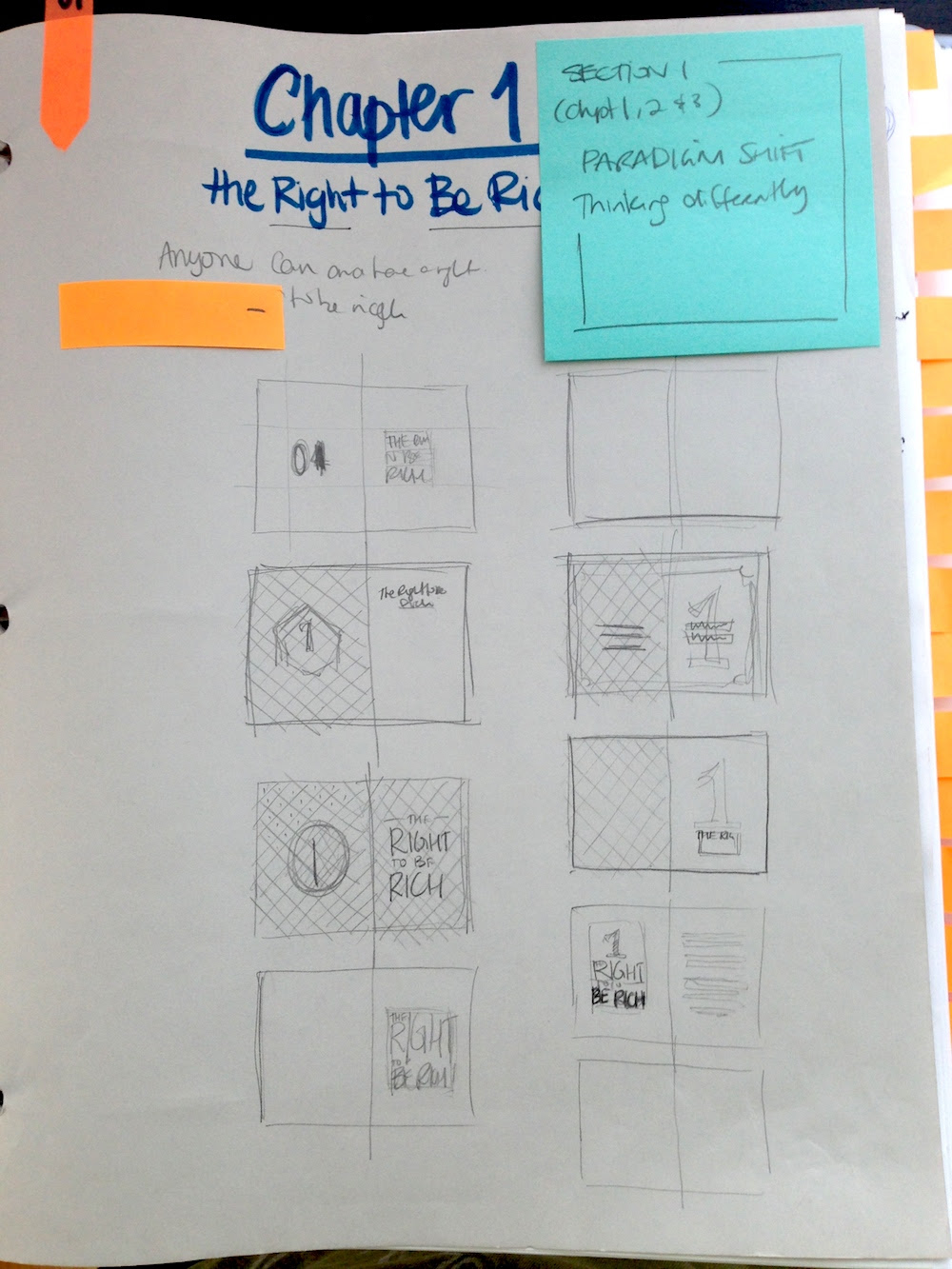 As a visual person, I usually come up with ideas on how things are going to look like at the same time as what the content will be. The upcoming study guide is no exception. As I'm writing, I also allow space for quick thumbnail sketches of what the pages could look like in my project binder. Of course nothing is final at this stage, but I like to keep all my layout ideas in one place so that when I'm ready to dive into it, I'll have a better grasp on the direction I want to take for the final look of the book.

In the picture you can see the first few layout sketches for the potential look of the introduction to each chapter. One of my ideas was to emulate the look of a dollar bill for each chapter. But I don't think this concept will make the final cut as it's not putting enough emphasis on what's most important. I tend to think in terms of how the readers will visually experience the book as they turns the pages and I also keep in mind what I want them to notice first or pay attention to the most, while being aesthetically pleasing to the eyes. After discovering that the book is organized in five main sections, I'm considering putting more emphasis on the sections rather then the chapters as they are more relevant than the individual chapters.
No comments: Links to this post
Email ThisBlogThis!Share to TwitterShare to FacebookShare to Pinterest
Labels: Book Design, Sneak Peek

In the first chapter of the book, The Right to Be Rich, Wattles talks about the natural tendency for all normal human beings to want to be all that they can be and how being rich plays a pivotal role in the pursuit of a successful and complete life. One particular paragraph caught my attention, he said :

Every person naturally wants to become all that they are capable of becoming; this desire to realize innate possibilities is inherent in human nature; we cannot help wanting to be all that we can be. Success in life is becoming what you want to be; you can become what you want to be only by making use of things, and you can have the free use of things only as you become rich enough to buy them.

Part of my investigation of the book involves looking for clues in the lives of successful people to see where the principles presented in the book seems to have been applied. As I was listening to an old taping of The Oprah Show that aired on November 14, 2005, I heard Oprah said this :


“There’s always patterns in my life. Whenever I feel like I’ve grown enough in one place I move on. So I felt that I’ve grown enough in National and couldn’t grow anymore so I moved on to Baltimore. I became a co-host of a local morning show called People are Talking with Richard Chair and then one day I heard that there was a morning show in Chicago that needed a new host, so I stayed up all night long with an editor, sent my audition tape in. Because I was one of those people who wasn’t prepared, I didn’t have... I wasn’t keeping all my stories, so I had to work all night. I was obsessed with getting this job. [...] I got hired.” - Oprah.

And it doesn't stop there. Now she has her own television channel, OWN, where she continues to provided value to her audience.

Every person naturally wants to become all that they are capable of becoming; this desire to realize innate possibilities is inherent in human nature; we cannot help wanting to be all that we can be.

I think Oprah is a great example of someone showcasing what Wattles talks about in the quote above. It seems like she naturally constantly wants to become more and to do more. Perhaps one of the main difference between her and someone else who's not as successful is the fact the she doesn't hold on to things that no longer serve her. Once she felt that she had grown as much as possible in one place, she moved on to the next opportunity: She took the next step up.  She didn't content herself with her co-host job, she went on to have her own talk show and once that was done after a successful 25 years, she created her own television channel where she can continue to grow and bring her fans along with her.

Without a large amount of money, Oprah would not have been able to create her own channel with her own unique shows and she most likely would not have been able to grow as much as she has thus far. As a consequence, she would not have been able to inspire and help countless number of people around the world, through her presence on TV, her endorsements, her gifts, her insights and her philanthropy. I believe this is why Wattles says that it is sinful to be content with less and not strive for more because by doing so you're not only doing yourself a disservice but you're also doing others an even greater disservice. Imagine if you have the capacity to be as influential as Oprah in your own unique field. What a shame it would be to not let others benefit from your equivalent contribution to the world.

I have a feeling I'll find a lot of what Wattles proposed to do in the life story of many successful people. As I move through the book I'll make sure to include more posts on case studies showing how the principles of the book have help others achieve success.

If you’re interested in being one of the first to know when the books will be available for purchase, subscribe to MJ's Newsletter below. As a token of appreciation, you will receive a free and updated PDF copy of The Science of Getting Rich from which the upcoming Study Guide, Workbook and Case Studies will be based on. 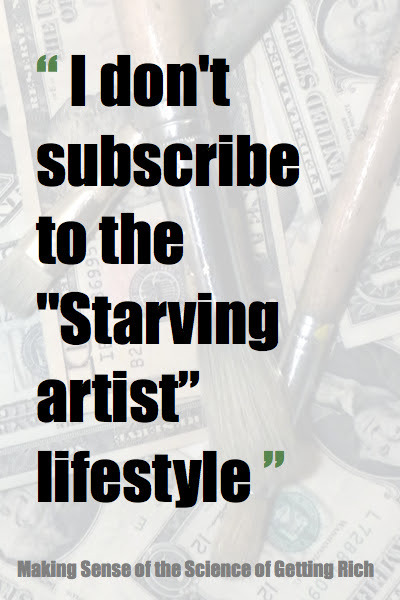